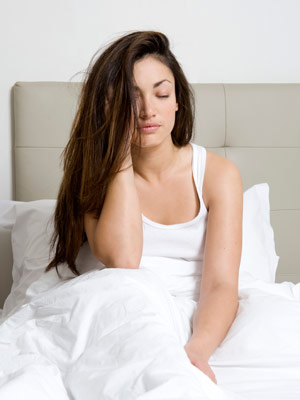 Picture yourself first thing in the morning. Your alarm clock has just yelped for you to get your lazy booty out of bed, but you’re still burying your head into the pillow. Your hair might resemble a fuzzy poodle and there might be a little drool dried on your chin, but hey, anything to distract from those puffy undereye circles, right? I’m convinced everyone wakes up looking like a wildebeest in the morning—even Gisele Bündchen.

You may have experienced some first-thing-in-the-morning ugly paranoia in the first few months of dating someone. One Allure editor, who wished to remain anonymous, set a sneaky alarm so she could get up an hour earlier than her new boyfriend and put on a full face of makeup before sliding back into bed to pretend to wake up with him. I have several friends who have admitted to sleeping with their makeup on when they have significant-other sleepovers. But the prospect of someone else seeing you in those first few waking moments isn’t the only thing that prompts action: Yet another Allure editor said that “if I feel like I look like dog doo-doo when I wake up, I quickly slip in the bathroom to dab on some concealer.” She’s not kick starting her beauty routine for the day—she’s just making herself presentable enough to eat breakfast and feed the cat. Solo.

Here’s my true confession: I always go to bed barefaced, and after a shower, I twist my hair into a messy braid, slip on my Steve Urkel glasses, and call it a night. Near my bed, I’ve stashed a tin of Altoids for particularly vile morning breath and some Smith’s Rosebud Salve for dry, cracked lips. It’s not a recipe for looking ravishing first thing in the morning, but at least I don’t have foundation caked on my pillow and my eyes aren’t glued together by mascara. I’ve made with peace with my morning face… which doesn’t mean I’d let anyone else see it.

How far from presentable are you first thing in the morning? Let us know your tips on how to rise and shine!

Error: Twitter did not respond. Please wait a few minutes and refresh this page.